@ninja98 just released a new version of his SiriProxy Plugin that allows you to control your Dreambox. The following commands are supported in this version:

The developer of SiriProxy, @plamoni, made a video on how to install SiriProxy on Ubuntu 11.10. If you don’t have Ubuntu, you can easily create a virtual machine on your PC or Mac with VirtualBox.

If you successfully set up Ubuntu, you can start installing SiriProxy: END_OF_DOCUMENT_TOKEN_TO_BE_REPLACED

@hjaltij‘s Plex plugin for SiriProxy got updated to support some more advanced functions. It now allows you to play the latest episode of your favorite TV Shows. You can also play a specific episode by asking “Play The Big Bang Theory Season 3 Episode 4”.

@ninja98 created a Plugin for SiriProxy allowing you to control your Enigma2 enabled device such as the Dreambox.

The Plugin is not available yet but in the video we can see that the following commands are supported:

Watch the video after the break: END_OF_DOCUMENT_TOKEN_TO_BE_REPLACED 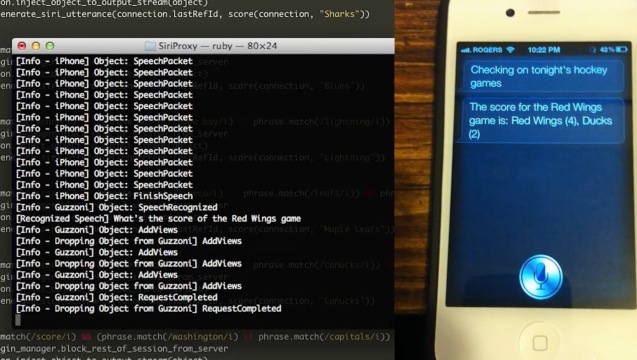 @senmu did some Siri hacking and wrote a plugin to fetch the latest hockey scores using @plamoni‘s SiriProxy.

The Plugin is available here. END_OF_DOCUMENT_TOKEN_TO_BE_REPLACED

With the help of @plamoni‘s Siri Proxy, @netpro2k managed to teach Siri how to tweet. This method is much more elegant than the SMS method, but it currently requires a complicated setup.

The commands are actually interpreted by Apple’s servers, and then intercepted by a proxy I have running locally. I am then simply using Twitter gem to make the post. Confirm and cancel work both by voice and by clicking the onscreen buttons. You may notice it appears the resutls are coming from WolframAlpha. I just used this response format as it allows you to return arbitrary text and images, as well as a confirmation. There is no interaction with wolfram’s servers.

Netpro2k’s code has been pulled into the main repository and can be downloaded here.