Developer Steven Troughton-Smith (@stroughtonsmith) managed to port Siri to the iPhone 4! It is not ready to be released to the public yet. For more info, click here.

Right now, Siri is available only on the iPhone 4S. But the jailbreak community is working hard on porting it to other iOS devices as well. 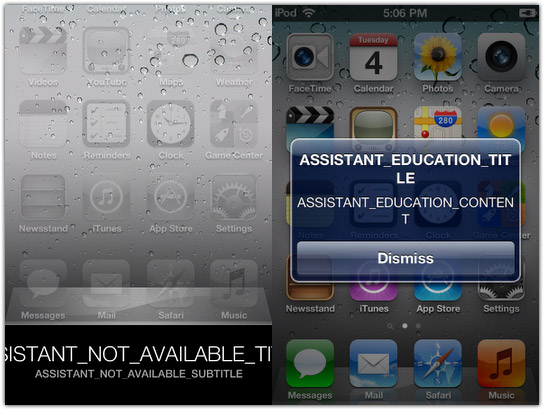 The picture shows an iPod touch 4G trying to utilize Siri using the iOS 5 GM. At this time, the only components that work is the dock, and the little “bing” sound when activated. The error shown is where they are currently stuck.

We successfully enabled Siri, but it seems out it is compiled to only work on the 4[s], and thus, cannot be used(yet).
- iH8sn0w

It’s definitely not just a plist value that you have to change in order to get Siri. Thus far, it has required a lot of searching and digging. After sending all the known information to John, I’m beginning to find that it is much harder than expected. We’re using an iPod touch 4G now but our aim is to port it to all devices that Apple won’t support. At this point, we’re unsure of whether Siri requires certain hardware components or not. At this point, we can’t say but are still trying. After buying the iPhone 4S myself, I will be looking to see if there are any new files that are not available on the current iOS 5 version. This might be our stopping point.
-iH8sn0w

5 thoughts on “Siri on other iOS devices”