Applidium today announced that they have cracked Siri’s secuirty protocol.

Today, we managed to crack open Siri’s protocol. As a result, we are able to use Siri’s recognition engine from any device. Yes, that means anyone could now write an Android app that uses the real Siri! Or use Siri on an iPad! And we’re goign to share this know-how with you.

The cracked Siri protocol could enable Siri’s speech recognition technology on any device, such as the iPhone 4, iPad, Mac, PC or even Android. END_OF_DOCUMENT_TOKEN_TO_BE_REPLACED

Last week, @chpwn and @stroughtonsmith released a video showing their Siri port on an iPhone 4 and iPod Touch. They used files from a jailbroken iPhone 4S, therefore they are currently not allowed to distribute the files because of copyright issues.

Today, @rpetrich, who released several tweaks like Activator or RetinaPad, got @chpwn’s and @stroughtonsmith’s port running on his iPhone 3GS. He is now working on Activator integration.

With Activator integration, Siri could do a lot of cool things it can’t do now, like opening Apps or changing Settings (ex. turn WiFi on/off). Together with HubotSiri, which adds custom commands to Siri, the functionality of Siri could be greatly increased.
However, to install Activator your iPhone needs to be jailbroken. So we will have to wait until we either have an iPhone 4S jailbreak or Siri on our iPhone 4. 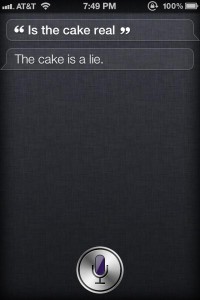 We wrote yesterday that @tmm1 is working on hubotsiri, a program which let’s you use custom commands with Siri. tmm1’s release isn’t public yet, but it looks like he is working together with @chpwn, because @chpwn just tweeted that he got his own version of custom commands in Siri working. 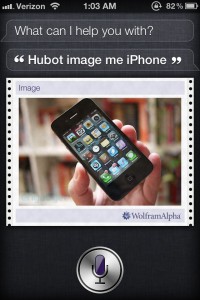 In the past few weeks, we covered a lot of Tips and Tricks on how to improve Siri. But most of these Tricks are just workarounds and they won’t allow you to do anything fancy such as opening apps or toggle your WiFi settings with your voice.
Hacker Aman Gupta (@tmm1) is now working on a way to add custom commands to Siri: hubotsiri.

Here’s how it works: All requests from Siri are redirected through a proxy. The proxy server and hubotsiri can then intercept Apples responses and add custom responses. Currently, it does 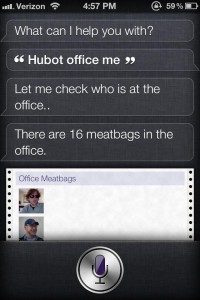 not require a jailbreak of your iPhone 4S, but you have to set up a proxy. Because your iPhone 4S does not have to be jailbroken, the custom commands are currently very limited. As we can see in the images you can add custom queries and get a nicely formatted answer. But you can’t open apps or interact with the Phone in any other way (eg. send a message to Twitter). Once a public jailbreak is available, the processing done with hubotsiri on the proxy server can probably be integrated into the iPhone. Custom Commands would then also allow you to open apps or websites, Toggle Bluetooth or WiFi settings and many other things.