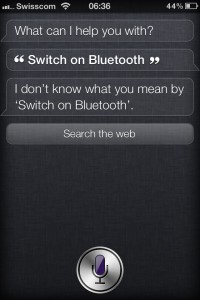 According to Macerkopf.de, iOS 5.1 will bring new commands to Siri that allow you to control hardware aspects of your device. Apple will also release iOS 5.0.2 very soon to solve the battery issues. iOS 5.0.2 should arrive by the end of next week.

With the new iOS 5.1, you’ll be able to tell Siri to “take a picture”, “make a video” or “switch off Wi-Fi/Bluetooth”. As Siri is still in beta, these new features are not very surprising.

iOS 5.1 will probably be released early next year. This means that we may also see some additional languages for Siri or at least support of maps and local search in countries other than the United States.

Unfortunately, Macerkopf.de doesn’t have any proof for these claims, so everything should be taken with some skepticism.

One thought on “Will iOS 5.1 Bring New Commands to Siri? [Rumor]”