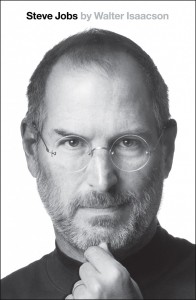 Earlier today, Steve Jobs’ biography was released. The book was written by Walter Isaacson, the same man who also wrote biographies about Benjamin Franklin and Albert Einstein. It is based on more than forty interviews with the Apple co-founder. Jobs’ biography explores the ups and downs of his turbulent life, as well as some hints on what apple might do in the future. END_OF_DOCUMENT_TOKEN_TO_BE_REPLACED

California Governor Jerry Brown declared Sunay the 16th of october Steve Jobs Day in california. This is the same date Apple is holding an invitation-only memorial event for Steve Jobs at Stanford University.

There are a lot of memorial videos that honor Jobs. This video is kind of special as it only uses sounds from mac producs:

“I made this song using only sounds from Apple products and Steve’s 2005 Stanford commencement speech. Every instrument, including drums, has been sampled from a Mac product, tuned by ear, and replayed in the context of the song.”

AzRmusic - In Dedication: Thank You, Steve (Only Mac Sounds Used)