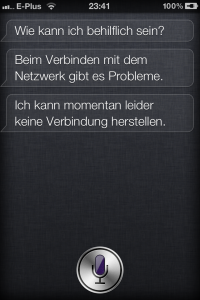 @rud0lf77 tweeted that he is making progress with his Siri port. He is now able to connect to Apple’s servers, but the servers won’t answer his requests just yet. He is using files from an iPhone 4S, so he can’t upload the files because of copyright issues.

Here´s one screenshot. i´ll upload the second one in a few minutes, siri still tries connecting to servers.. http://pic.twitter.com/I2IowGYk - rud0lf77

A few minutes later he tweeted that the Server now talks to him, but doesn’t process his requests.

Soo, the Server talks to us, but of course doesn´t answer to our requests. I´ll upload some screenshots now!

And now, Siri talks to me!!! It says that it can´t connect to the server. http://pic.twitter.com/XE7GZSgH - rud0lf77

@ILovesMoms asked rud0lf77 how long it might take him to get Siri working on the iPhone 4. He responded that it would take at least a few weeks. He also doesn’t know if he can continue working on his port because school starts again soon.

Ich werde sehen, ob ich überhaupt noch weiter daran arbeiten werde… Ich muss bald wieder zur Schule…  - rud0lf77
Translation: I’ll have to see if i can keep on working on the port… I have to go to school again soon…

Jackoplane, another hacker working on a Siri port to the iPhone 4, tweeted yesterday that his port will be out “*very* soon”. So let’s see who manages to release Siri for the iPhone 4, iPad and iPod Touch first.